Hannah loves the kitchen.  I mean, she loves it - everything about it.
She likes helping me bake.
She gets excited when the mixer comes out.
She loves her spot on the stool helping me.
She likes the water - just turning the faucet on is lots of fun.
She really likes washing dishes - mostly because of the soap suds.
She loves to play in my pots and pans, stacking and organizing them.
Let's just say she's had fun in Grandma's kitchen.  She has lots of fun cupboards and drawers to play in.  Here she is playing with the different mixing bowls. 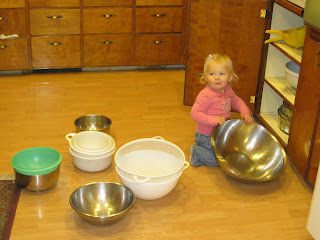 Posted by the Flammers at 8:10 PM 0 comments

We made it home for Christmas.  Hannah is thrilled with the new house to explore and all of the toys.  She has had fun playing with her cousins.  Here's a picture of her and cousin Ellie practicing their piano skills. 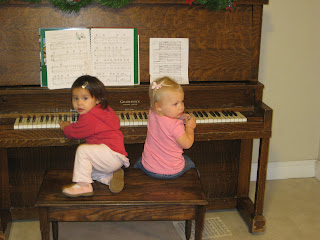 And here they are giving luvs: 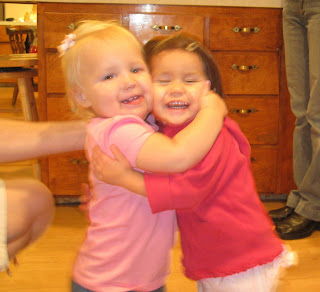 Posted by the Flammers at 7:58 PM 1 comments

She had her 18 month check up a few weeks ago and here were the stats: 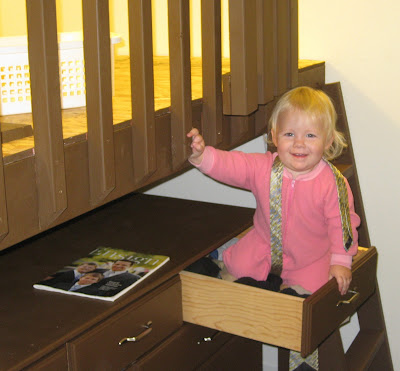 I had the sock drawer open
while I was packing and she climbed the ladder of her new bed/play pen and crawled right into the sock drawer.  I actually had the camera in hand so I snapped a quick picture before getting her out.

Yes, that's our little chunker.  She's officially been demoted from whole milk to 2%.  She has finally recovered from all the shots.  Not only did she have her immunizations, but also the flu shot, a tb test, and had her blood drawn to be tested for lead.  It was a rough couple of days for her.  Apparently she takes after me and has very small veins that are hard to find.  After 2 unsuccessful attempts at the doctor's office they sent us to the lab, where they finally got her blood.  It was not fun for either of us.  She screamed and screamed and screamed while I got to hold her down.
I'm just glad it's over, but I'm afraid she has a fear of doctor's offices now.  A week after her doctor's visit I went to my prenatal checkup and brought her with me.  She was perfectly content until we entered the examining room - then she started to scream.  My entire appointment and ultrasound were completed with her in my arms.  It wasn't particularly fun, but it was the fastest doctor's appointment I've had yet.

Posted by the Flammers at 4:54 PM 1 comments

Hot water.  We finally have HOT water.  After it being gone for 4 days, it is so good to have back.  We missed it profusely.  I know we don't have freezing cold temperatures here, and we lived without it for 2 years, so I shouldn't complain.  But, when we didn't know it was going to be turned off or when it would be turned on, we got pretty cranky without it.  Now we can go back to clean dishes, and long relaxing showers in warmth!  hooray.

Posted by the Flammers at 2:16 PM 0 comments

The weather is our favorite thing about LA (the only really redeeming factor).  The mornings and evenings are pretty cool, but the days warm up and are usually nice and pretty sunny.  It's great!! We love it, but my morning runs with Hannah are pretty chilly.  So, I decided we needed to make a hat and mittens to keep her warm.  Here she is trying them on for me.  I couldn't get her to stand still, so it's a little blurry.  She really liked them at first, but now I have a very hard time keeping them on her.  Oh well! 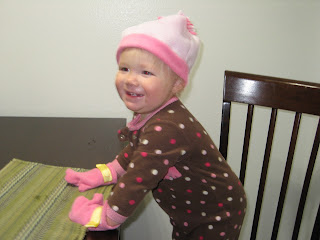 Posted by the Flammers at 9:11 PM 1 comments

The Newest Addition to the Family.... 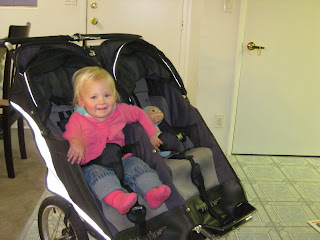 Our double jogging stroller!  I know it might seem lame, but I am pretty excited about it.  We were planning on buying one, but they are so expensive so we haven't done it.  Plus, it takes up lots of room and we had to find a spot for it.  Anyway, thanks to Craigslist we got a decent deal on one.  It's definitely been used, but it was just what we were looking for.  We decided to test it out with Hannah and her baby doll in the infant harness.  They seemed to like it. 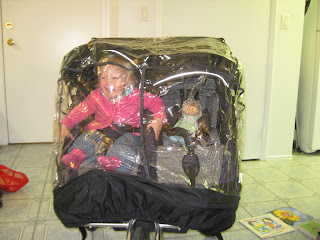 Here's the rain tarp.  It doesn't rain very often, but when it does I hate not being able to go outside or get any exercise.  So, we made sure we got one with a rain cover.  Hannah thought it was pretty funny.

Posted by the Flammers at 9:10 PM 1 comments