Sadly, we have not purchased a new car, but Hannah has a stroller. We broke it out and took it for its first spin around the block on Sunday. Here we are with her new set of wheels: 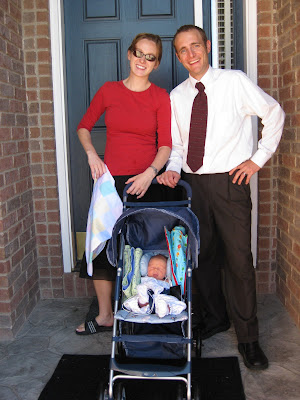 She's still a little small for the seat and kept sliding around in the seat. We probably should just wait until she's a little older and bigger, but I was ready to get out of the house and a walk sounded like the perfect family activity. So, we propped her up with lots of blankets and the head rest from her car seat. Here's an up close look at the finished product. It has sort of a hillbilly touch, but it worked. James thought the head rest looked like massive ear phones, so we added his ipod and she looked like she was rockin' to some music, but the photo didn't turn out too well. Needless to say, we had a pretty good laugh and spent more time preparing for the walk than actually walking. But, I guess that's just how it goes. 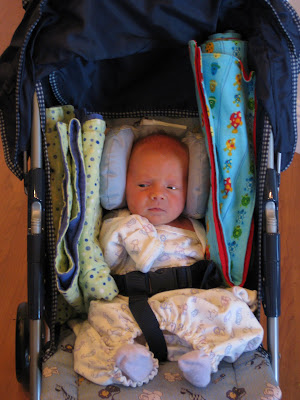 Posted by the Flammers at 7:27 AM 2 comments 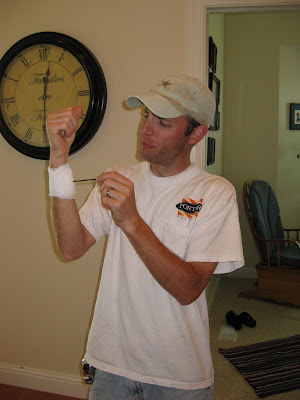 The other day James came home from work early with a bandaged arm informing me he had been to the Emergency Room. This is not something anyone wants to hear, especially knowing James and how he would avoid going to a doctor at all costs, let alone the ER. Apparently he was working on a house using a nail gun. Everything was going along fine until he shot the nail gun and the safety double fired. I'm not sure if that's the correct terminology, but the gun shot out an extra nail and instead of going into the house it went into James. Ouch. That sounds painful to me. It went into his arm (see bandage) a couple of inches deep. He was able to salvage the nail and is showing it off in the picture above. He was pretty nonchalant about the whole ordeal. I'm just glad he's okay and the wound seems to be healing without any problems.

Posted by the Flammers at 7:21 AM 2 comments 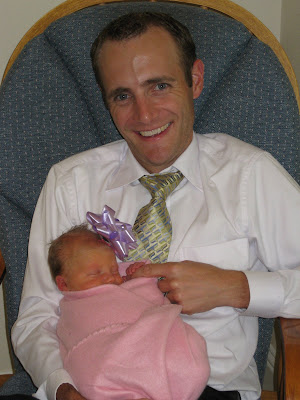 Seeing that James is now a father I felt a little guilty for not having anything for him on Father's Day. Then, someone (thanks Lace) reminded me that she was a pretty good gift to give. So, here's a picture of James with his Father's Day gift. Aren't they cute together? I think we'll keep her. :D

Posted by the Flammers at 6:28 PM 5 comments

A million of anything is a lot, so I felt pretty comfortable with 3.6 million seconds to prepare myself for fatherhood. My procrastination techniques did not serve me too well. Monday night at our Lamaze class Britt was talking about some contractions that she was having, but she disregarded them as Braxton-Hicks contractions (for those of you who don’t know what Braxton-Hicks contractions are you are not alone I would like to compare them to the false start in the football game called pregnancy). So around Midnight she got up to sleep on the couch in the hopes of finding the right position, but each time she was about to doze off another contraction would hit making it impossible to sleep. This went on until 6:00 in the morning when we thought it might be best to call the doctor’s office. Britt, not wanting to be a ‘burdensome first-timer’ thought it better to wait until the office opened at 8:00 at which point they told her to take a bath and if it didn’t get better within the next couple hours to call and schedule an appointment. Ultimately things did not get better and at 11:00 she headed to the Doctor’s office. It seemed that the nurses were not too concerned about the situation and went on their merry way until the examination started and the commotion started. By 11:45 she was checked into the hospital with an IV. I arrived at 12:15 (after breaking most traffic laws known to man). My honed Lamaze skills came to play and at 1:30 Hannah Lynn Flammer decided it was time. Britt did great with labor and she had done so much of it at home that it didn’t take long. She went without the epidural, but I asked for one. I honestly believe I could have enjoyed the process a little more if I hadn’t been so worried about Hannah and what it was going to take to get her healthy. The 3 doctors in the room (along with 3 nurses) did a great job in keeping it light. When she was born they were pretty sure she was going to weigh around 4 or 5 pounds so they were really surprised when she was 6 pound and 4 ounces. Hannah got hauled away to the Newborn Intensive Care Unit and Britt got put in a room for recovery, I kind of went back and forth. 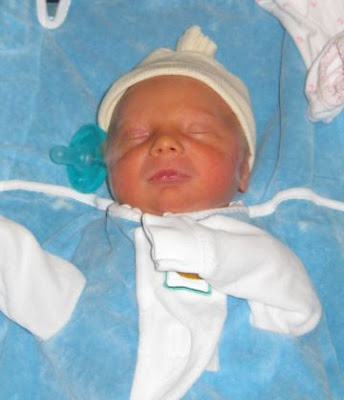 I really didn’t want to spend too much time with Hannah due to the intimidation of all the machines she was hooked up to. Britt and I did get a chance to go down together and spend a little time with her. Hannah did great in the NICU and we were able to take her home 6 hours after Britt checked out. Taking Hannah off of the machines was a little nerve racking. As intimidating as the machines were and as much as I struggled holding her with all the cords I took a lot of comfort in being able to look at the machine to see that her heart was beating and that oxygen was being distributed. All in all I am not sure that the extra 3.6 million seconds would have done much to prepare me for fatherhood, but it was kind of nice living in ignorance before. I have been a dad for a total of 78 hours (4680 minutes, 280,800 seconds) but it is by far the most humbling thing I have ever done. This is just the beginning. As for the picture, don't let the blue fool you, it is just the outfit they have for laying on the tanning bed. I kind of think that was the real reason Hannah came early, she wanted to work on her tan and she figured between the bed and having all of July she would be sitting pretty. 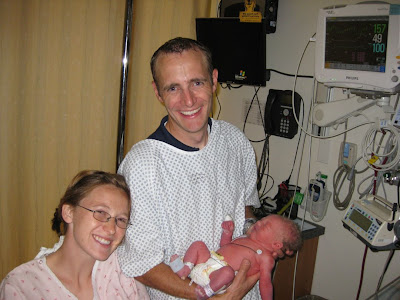 This is us hanging with Hannah. It kind of gives you a good idea of what she was hooked up to. On her right hand is the IV and if you look at the monitor the top number is her heart beat, the middle is her breathing, and the bottom number is the oxygen monitor that is on her right foot.

Finally, I think it's all done - all of the little projects I planned related to Hannah are finished. I'm sure lots more unplanned ones will come, but for now I'm done. Here are a few of the small projects I've been working on that have invaded my life.
I mod podged the letters above spelling "Hannah" and I painted these picture frames to give us some wall hangings.

I made a baby quilt. It was my first time piecing anything and it's very amateur, but it's good enough for me. My friends mom, Joleen, quilted it and did an amazing job. It makes me wish I'd have done a little better job on my part, but too late now. She quilted a baby carriage and Hannah's name in it. Amazing. Thanks so much. To go along with the quilt there's a crib skirt and material for curtains. 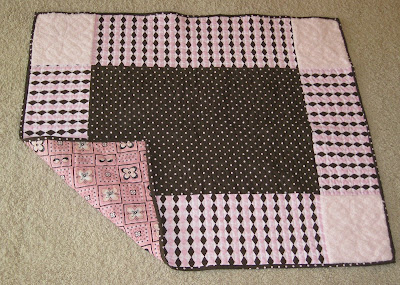 Somewhere I got the idea in my head to make bibs and burp cloths. Bad, Bad, Bad idea!! They're not hard, in fact they're very simple, but not worth the effort. After tracing the pattern, cutting, sewing, turning right side's out, doing another decorative stitch, and sewing in the snaps they took a long time. I don't know what I was thinking. I priced bibs at Wally World and found 10 for $13. Mine ended up costing slightly less, unless you include all the labor. Yuck! Never again will I make them. On the bright side, I now have 4 small bibs, 6 big bibs, and 5 burp cloths- all reversable. I also got to practice the decorative stitches on my sewing machine. 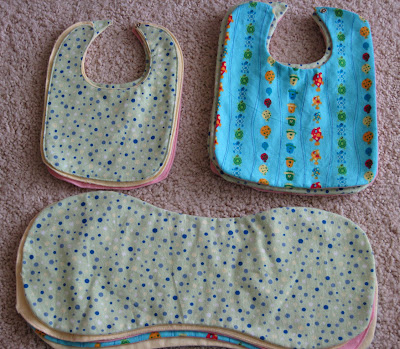 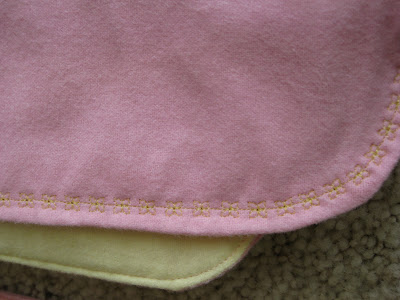 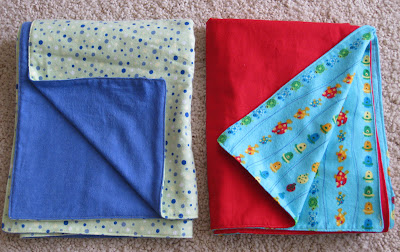 My sister recommended I make a hooded bath towel. In fact, I blame her for most of these projects, majority of them were her idea. :D This was quick and easy. I didn't do a very good job matching the hood to the towel, I'll have to do a better job next time.

Lastly, I made a nursing cover aka hooter hider. That name is rather crude, but really cracked me up. I don't know how functional it is, but it was only about $3.50 and really easy to make. Yay! 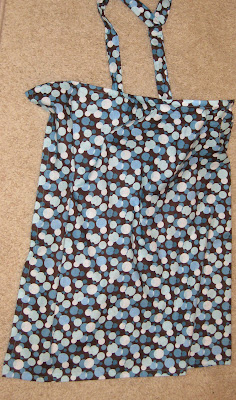 Hello Thailand!! This morning we woke up to two different phone calls from friends in Thailand. It was good to talk to them, but a little difficult to think in Thai at 5 in the morning. We've only been home 4 months and we're already getting rusty. I guess that's something to work on!! We did get reprimanded for not calling more often, so we'll have to start doing better.

Posted by the Flammers at 3:04 PM 1 comments

It only took us a few months but we finally managed to meet up with some of our long lost friends. Better late than never, right? We met and spent the afternoon at Hogle Zoo. It was fun to catch up and spend a little time together. Isn't their daughter so cute? It was also fun to see some of the animals. I think the giraffe's and elephants were my favorite! Thanks for inviting us and putting up with us for a few hours! 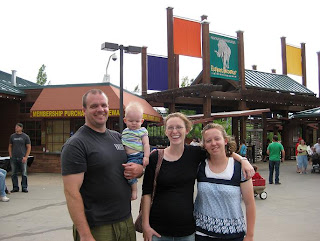