I feel like we've had some crazy adventures in our 10 years of marriage.  Most of them have involved moving new, and often very foreign, places.  Well, it's time for an adventure of a different sort. We're starting a business with another family from our church back in Arkansas.

Yep...us starting a business....back in Arkansas where we know almost no one.  You read that right. Think children's play museum....that's how I've described it to people.  Not an actual museum, but an imaginative, educating play environment for kids.

We were planning on moving back to Utah.  Remember how we just bought a truck for the sole purpose of moving?  The very same day we loaded up all of our stuff a couple from our ward invited us over for dinner and presented us with the idea of this business.  To make a long story short we thought the idea over (you know all night long when we couldn't sleep), talked with them some more the next day and decided not to move our stuff home.  We unloaded everything and left the truck there to drive back to Utah for an extended visit and lots more thinking about this business. From the beginning it felt like a great idea.  Maybe it didn't seem like the smartest move in my head, but it felt good.  The more we've thought, prayed, and researched the better we've felt.  So, we're planning on moving back to Arkansas in August to get things started and open the business with this family as soon as possible.

Life is so interesting the way it works out.  There's no way in a million years we would do this on our own.  I'm the business graduate who avoided entrepreneurship classes because I had zero interest. I'm boring. I like knowing what to expect (like a steady paycheck and a 9-5 type job).  But the way our life has gone the last year that just doesn't seem to be happening and we've been looking for something else.  We feel like this is a great idea and we're really hopeful for it.  We've been doing LOTS of research and realize it will be a lot of work and lots of stress, but we're excited about it.

So...on to the new adventure!!

** FYI - this post is a little lengthy and a little personal.  Feel free to skip if you're not interested. There have been several times I've wished our blog wasn't linked up to Facebook.  I've thought of 'un-linking' it but that requires figuring out how to do it and takes way more energy than I have at the moment.

***FYI Again.  This post was written a week or two before we came back to Utah.  Our plans have totally changed, but this is how I was feeling and I want to document it for me to have so I'm posting it here.  I'll do an update and what's really happening soon.

We've moved a lot.  Utah, Germany, Thailand, LA, Turkey, and Arkansas have been our 'major' moves.  But there have been so many additional local moves and then all the 'pit stops' in Utah in between school/jobs trying to figure out what's next. I don't think I can accurately count the number of times we've loaded up all of our stuff into boxes (or suitcases) and headed off.  Let's just say the number of past addresses in our amazon account is slightly embarrassing.  It just isn't right when you're being asked about old addresses (for security purposes) and can't remember if you ever lived at that address or not....or occasionally forgetting where we are living right now.  Or being able to tell which kid it is in a baby picture based on the location....yikes!!

We've had some great adventures and I wouldn't trade them, and the lessons learned, for anything. But, I'm definitely ready to settle down.  This move to Arkansas was fully intended to be permanent. It was a legit job with benefits - we were actually going to have insurance!  Can I tell you how excited I was to be able to find doctors for our kids and never have to switch again!!!!!!!!! Not just another adventure.  We contacted a real estate agent and even looked at houses to buy.  This 'legit' job didn't pay very much, and we knew it would be very tight for a few years, but hey, we're frugal. We don't need a lot.  Our kids have never had much and are young enough they don't complain too much. We had done the math, evaluated our anticipated budget in every possible way.  We were ready to make it work and were excited about it.

And then we moved.  And then after a month and a half received our first full paycheck.  And we realized our budget was way off.  Our anticipated take home pay was lots less than what he had calculated (apparently you can't trust everything you read online)!  :D

To make a long story a tiny bit shorter we quickly realized there was no way we could make this work financially.  To top it off we had major issues with medical insurance - and haven't been insured.  There has been lots of stress.  So...we stopped looking at houses to buy and started looking at different jobs.  There were lots of jobs we discussed, so many applications filled out, and a few interviews.  Some were promising, some not so much.  The job search really isn't very much fun (and it's not even me doing the work). Anyway, James was offered a job here in NWA and we were really excited about it.  We thought we had things figured out and it made perfect sense.  But, the job offer was rescinded and we went back to square one.

After lots of thinking, praying, pleading, sleepless nights, frustrating days of trying to figure out how we could this work we realized we needed to move back to Utah.  I don't know why.  Logically it doesn't make much sense.  Not at all.  No job, no promise of a job, awful dry weather and freezing cold winters....but it feels right.  I think. As long as I don't think logically.

So, we've been packing up our stuff, yet again...and moving on.

* An update on what our new plans are will be coming soon....this was getting too long!

Posted by the Flammers at 4:28 PM 2 comments

We have been looking at vans for months.  We usually take a long time to take decisions (especially ones that involve spending money).  When we were able to move TJ to a bigger car seat and still fit all 3 kids in the back of the seat we decided to postpone buying a van.

Then we decided we were moving back to Utah.  Moving prices are insane! We were having a hard time deciding how to move (moving truck, pod, etc...).  About 5 days before we moved we bought a truck.  Why a truck?!  To move.  It was going to save us $1000 in moving costs and we figured we would be able to sell it in Utah after we got there.

Then plans kind of changed even more last minute and we unloaded our stuff and left the truck in Arkansas.

Fastforward 2 weeks.  We're in Utah and we knew we need to get a van.  The Corolla just wasn't going to fit us much longer and my sister and her family will be able to get a lot more use out of it than we can.  So we were keeping an eye open and found a van.

We liked it.  It doubled the amount of space we had.  It had sliding doors.  It had tons of miles....but that also means it fit into our meager budget! And did I mention those sliding doors?! And that it fit our budget?!

So far we like it.  I'm still terrified of backing up and parking it. And I feel like I need a microphone to talk to kids in the very backseat....but we like it. 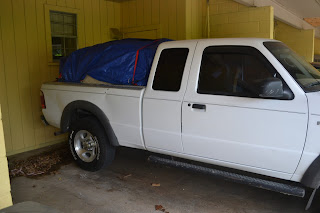 Awful picture...but there it is all loaded up with our stuff in the back. 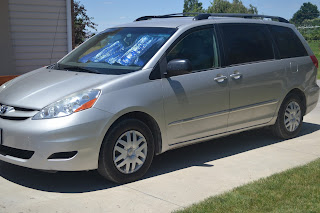 This little guy had a birthday.  It's hard to believe he's 2 and we definitely don't have a baby anymore. 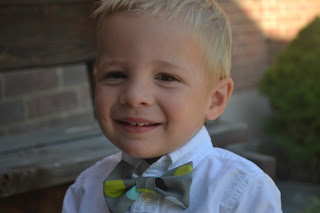 At 2 years TJ:
* still give snuggles in the morning, but not nearly as much as he used to
* favorite words are "MINE!!" and "NO!"
* bites when he's angry
* throws the biggest tantrums for about 2-10 minutes (full on kicking and screaming and banging his head on the floor).  Once he gets it out of his system he's usually good to go. Usually!
* has the cutest puppy dog eyes
* has developed a taste for grandpa's yucky juice (or anything other than water)
* doesn't let himself get pushed around too much
* is very good at saying 'thank you'
* is terrified of dogs (or any living creature for that matter)
* is great at pushing buttons (literally and figuratively)
* by far the best traveler EVER.  He hardly ever complains about car rides...even the 20 hour one here.

Hard to believe this little guy can melt my heart and drive me crazy all at the same time.  Can't imagine life without him.

Posted by the Flammers at 4:48 PM 2 comments 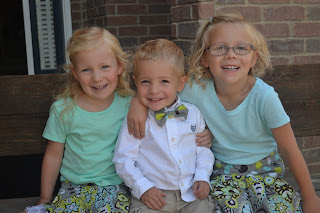 It never would have happened except my sister made the girls' outfits.  If she could do that I figure I could manage to come up with a bow tie for TJ, right?

Posted by the Flammers at 7:59 PM 3 comments