We are pretty much adjusted and I am getting used to cooking here.  There are lots of good foods, but I am getting bored of the meals I know how to make and there are foods I don't know what to do with.  So I am looking for ideas for more meals.  Here are the foods that are readily available:

eggplant
green beans
potatoes
carrots
red/green peppers - my husband and I don't really care for them and our kids really dislike them, but we are working on changing that
squash - I have no idea what kind it is, but it's some sort of squash/zucchini that I could substitute for zucchini
pumpkin - it's not our traditional pumpkin - it's green on the outside, but looks like pumpkin on the inside
broccoli
cauliflower

chickpeas
bulgar - i have no idea what to do with this
other beans - mostly white, but i don't recognize them and cannot find any translation

chicken - our main staple
hamburger - i think I found ground beef, but it's like $12/lb, so I'm trying to use it minimally
lamb - we have eaten it and it's good, but I have no idea how to cook it

We don't have a microwave, but did buy a toaster oven that can bake things pretty well, just small scale. So....if you have any ideas/suggestions for what meals I can make....I would LOVE to hear your ideas!!

Posted by the Flammers at 8:54 PM 3 comments

We finally got here late Saturday night and were able to get a few things at a market before Sunday.  We had our first church at our home on Sunday.  Monday we were able to make a trip with a neighbor to a large store to buy a bunch of 'house' stuff....you know the boring hangers, food, broom, mop, etc.....).

Then we got sick.  We've had the queasy stomachs that go along with new food, but we got sick.  The throw up all night long, diarrhea sick.  Like clockwork James, Hannah, and I were running to the bathroom. Hannah and I even shared the toilet while throwing up a few times.

It was miserable.  I was wishing we were home.  We were wondering if we were going to survive.

Tuesday we were getting better.  Just throwing up occasionally, but then TJ had a fever and got sick.

I ended up going to the hospital with TJ.  A few hours and some medicine later we were doing better.

We have all recovered from the flu.  Hannah and Sofia have had fevers, but basically we are all feeling pretty good again.

Now, we are beginning to get settled.

Posted by the Flammers at 4:57 AM 1 comments

Wow.  It was kind of a rough one.  You know how you plan for the worst, but expect the best.  We are glad we packed with extra clothes in the carry-on, extra food, etc.... We used it.

We left home Thursday morning and had plenty of time at the Salt Lake Airport, so we set off to find the kids play area, but they got rid of the play area.  Bummer

Our first flight was good.  We had 4 seats no where near each other, so we asked people to move so we could be with our kids.  The lady that switched with me really didn't want to...I told her she could sit next to our 4 year old instead...and then she decided to switch.  We found out TJ had bad ear infections 2 days before we left, so we were nervous he would scream during the flights, but he did great!

Our flight from Denver to Frankfurt was delayed by about an hour.  We thought we would still have time to catch our connecting flight.  Then we sat on the tarmac for 2 hours before takeoff.  The girls were asking, "Are we there yet?" before we even took off.  But, that night the girls did pretty well sleeping.  They kept their heads on James' lap, so Sofia's feet kept falling into the aisle.  I had TJ and walked around the aisle some to keep him happy.  After getting him to sleep, we didn't have a bassinet so he was on my lap.  Hannah kept squirming and kicking me and TJ throughout the night.  On our descent, it was a little choppy and Hannah threw up.  It was by far the most she has ever thrown up.  Majority of it was caught in the barf bag, but it also went all over her clothes and some on James.  It smelled lovely!!

We missed our flight in Frankfurt.  No on could help us.  No one.  They kept sending us to a service center that was closed...After lots of walking around James left me with the kids to camp out while he tried to figure it out.  He managed to get new flights figured out, meanwhile the kids all had to go to the bathroom.  Me, 3 kids, and our luggage was quite a sight to behold while we maneuvered to the bathroom twice (Sofia couldn't get it all done in 1 trip!!).  We met back up with James and went to our new gate.  Then they switched our gates to the other end of the terminal.  We make it to the other end of the terminal to realize it wasn't our flight that was switched...it was a different one to Istanbul leaving at the same time as ours.   Back to our original gate.

Our flight to Istanbul was delayed so we missed the last flight to our destination point.  We spent about an hour in Istanbul waiting for them to get us on a flight for the next morning.  Then we spent another hour waiting for them  to get us a hotel for the night.  James was waiting the entire time while I was trying to entertain the kids.  After 2 hours, the told us they couldn't get us a hotel.  So, at 11 pm we forked out a ton of money to get a hotel and a ride there/back from the airport.  We finally got the girls to sleep at midnight.  TJ finally got to sleep around 3 or 4 in the morning and we had to wake up the girls at 5am to go back to the airport.

We finally arrive in Erzurum and 2 of our suitcases were missing.  Somehow they got lost in Frankfurt and never caught up to us.  There were supposed to be people from the University to pick us up and take us to our apartment.  There was no one there to meet us.  They did not give us an address and we had no phone...so the airport people helped us find a hotel in the city.  We were going to take a taxi but the bus was a lot cheaper...so we took a bus and eventually got to the hotel.  There was wifi at the hotel so James was able to email his contact.  Eventually they picked us up and brought us to our apartment Saturday evening after we had already overpaid for a hotel.

It felt like one thing after another went wrong.  It was actually funny.  Except, it's so much more stressful with kids.  And it cost us a lot of money in addition to the fortune we had forked out to get us on the same flights as James.  The girls were amazing, but so done with flying by the time we got here.

Posted by the Flammers at 4:51 AM 4 comments

On Top of the World

A few weeks ago we went and played in the canal.  The girls have always loved throwing things into the canal, but now that the water has drained out of it they think it's even more fun to play in it. 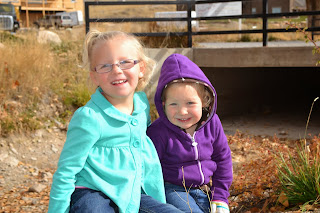 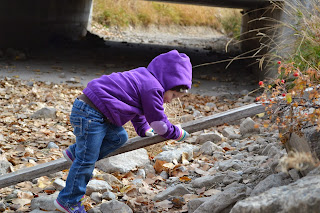 To get home, they walked on top of the dirt piles....and acted as if they were on top of the world.  It kind of looked like they were (and made me a little nervous because they were pretty high, but they made it home without falling off!) 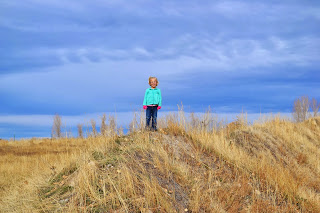 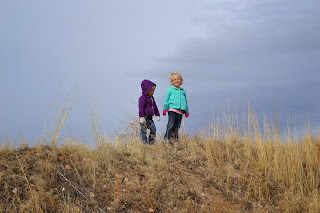 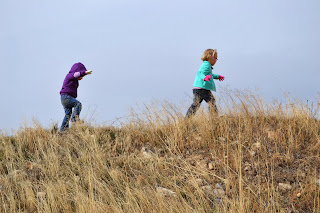 Posted by the Flammers at 5:18 AM 1 comments