Happy Halloween!  Here's Hannah in her costume.  It was the easiest and cheapest thing I could think of doing.  Considering she doesn't know what Halloween is and she's not going to be doing trick or treating I didn't feel like doing anything elaborate (or maybe it's just laziness) :D.  But, she seemed to have fun in her tutu. 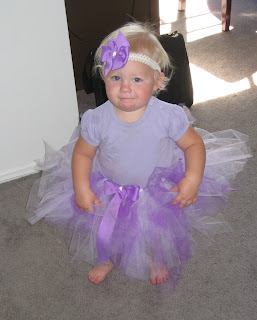 Here she is modeling the costume.  We went to a retirement center with some other kids to visit some of the elderly.  She had lots of fun and the old ladies adored her. 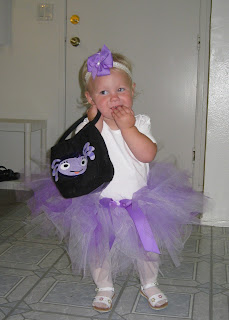 Here she is the night of our ward party.  She didn't understand the concept of trick or treating for candy, but she sure liked to carry the bag around.  It looks like we definitely have a girl on our hands.

Posted by the Flammers at 4:34 PM 0 comments

Our Little Baker in the Making

Last night James needed to do some studying before Hannah went to bed. It was a cooler evening, so we decided to do some baking. Hannah was such a big help.
She had so much fun stirring all of the ingredients. I'm pretty sure she ended up wearing as much flour as we used, but she seemed to enjoy it. I think her favorite part was the mixer. 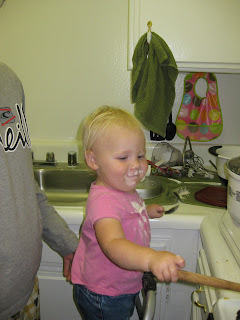 I personally love the flour mustache. 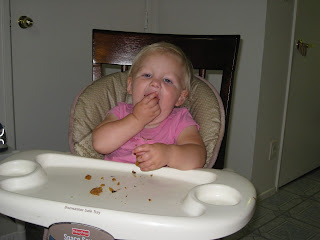 Here she is enjoying the finished product.

Posted by the Flammers at 1:38 PM 1 comments 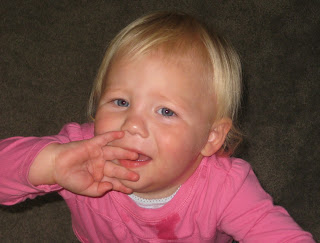 We are currently transitioning from 2 naps a day to 1.  This is the face I see looking up at me quite often throughout the day.  What a sad little face.  I'm afraid we'll be seeing this until she gets adjusted to a new routine.  So fun.

Posted by the Flammers at 1:44 PM 1 comments

This Sunday the Bishop told us we could try taking Hannah to the nursery.  She's only 16 months old, but the nursery is so small they could handle another little one, as long as she did okay.   She did great.  I thought I might have to stay with her, but she saw the toys and ran.  Can I just say church was.....AMAZING!

Posted by the Flammers at 1:27 PM 1 comments

Here's a rag blanket I made for Hannah a few weeks ago.  It was starting to get cold and the 2 we brought with us aren't going to be enough for the winter.  However, since I made the blanket it's been HOT...go figure. 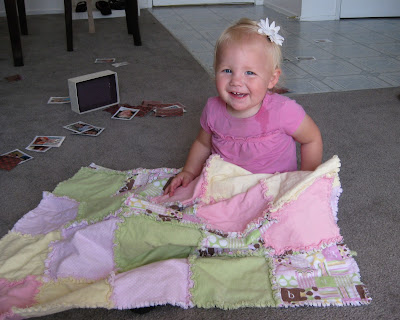 Posted by the Flammers at 4:38 PM 1 comments

Reasons Why We Love LA

Sorry about the sarcasm - I really try not to be sarcastic generally, but it's not working so much.  Anyway, these are currently the top reasons why we love LA:
1. Traffic. We are learning to live with the traffic, but we've never experienced it on a Sunday before.  We left for the church Sunday morning with just enough time to get there and sit down before conference started.  The 2 mile trek usually takes about 10 minutes with no traffic Sunday morning.  However, a major street was closed due to a bike race.  Eventually we got to church - 40 minutes later.  On the way home we thought the road would be opened...but no....apparently it was a really long bike race.  It took us over an hour to drive 2 miles.  Yikes!!
2.  Theft of Bikes.  James came with 2 bikes:  one he likes and another, older one.  He's only been riding the old one to campus because he decided the other one is too nice.  We were planning on bringing it home at Christmas time and leaving it there.  We figured it was just a matter of time until the other, old bike got stolen on campus.  However, we weren't really expecting both of them to disappear while locked in our own secured parking garage.  That's what happened today--BUMMER.
3.  Theft of Newspaper.   We ordered a subscription of the LA Times for the Sunday edition to be delivered back in August.  The first 2 weeks we got the newspaper without problem.  Since then, we haven't received it, although it has been delivered each time.  Every week we notify them we never received it and sometimes they deliver another copy and sometimes they just credit our account.
Anyway, these are the top 3 reasons why we love LA at the moment.  Ok - don't get me wrong, we really do like living here some days more than others.  I'm feeling especially guilty about my bad attitude especially after President Monsons' talk on Sunday.  We really do have a lot to be grateful for, it's just been an annoying couple of days.  Oh well...that's life.

Posted by the Flammers at 6:50 PM 2 comments

The other day I was cleaning out our dresser (It's time to make a drawer for my maternity clothes/baby clothes).  Anyway, I left the bedroom to get something and came back in to find Hannah just sitting and playing in the drawer. 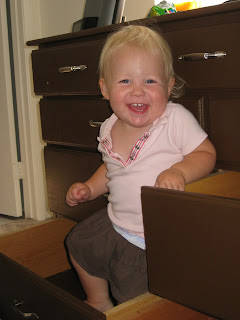 Posted by the Flammers at 8:18 PM 2 comments