Hannah had her first real haircut this week.  She was beginning to develop a mullet so I figured I should probably do something about it.  I had planned on waiting until James was home to help distract her, but the opportunity came and I took advantage of it.  Therefore, I didn't get any really decent pictures.  Here's an after shot and one of the hair on the floor.  I cut about 3 inches off.  Yikes! 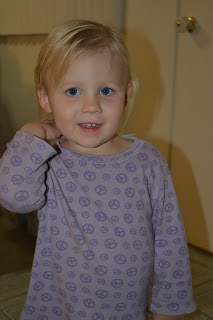 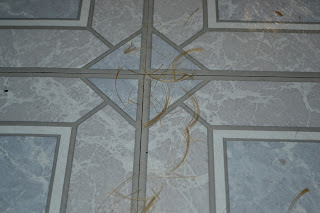 Hannah did pretty well keeping still, however there was one mishap.  I went to adjust the computer (her distraction) and she got a hold of the scissors and cut her hair.  She added some more bangs on top.  Seriously, I only had my back turned for like 15 seconds and she climbed up, got her own scissors, and cut her hair.  Oh well, at least it kind of blends in with the rest of her bangs so it's not too noticeable.

Posted by the Flammers at 4:12 PM 3 comments

Sofia took her first steps about a month ago, but is just now beginning to walk more and more.  We figured we should document it....so here is the awful attempt: 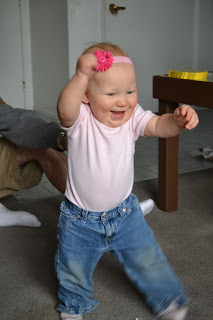 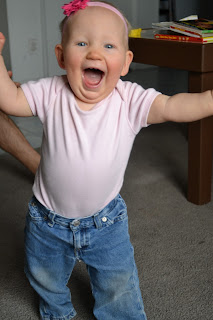 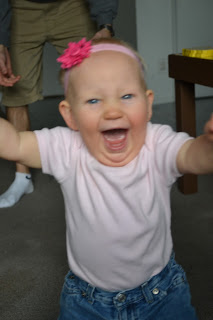 I love her facial expressions.  She is so proud of herself!

Posted by the Flammers at 8:35 PM 3 comments

We hiked the Hollywood sign the other day with some friends.  We carried the camera, but didn't pull it out until we were up on top.  So, we didn't get a picture of the sign itself, but at least we used the camera.
Here's the view from the top: 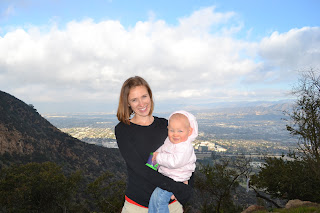 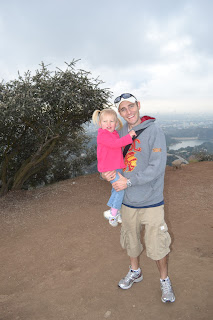 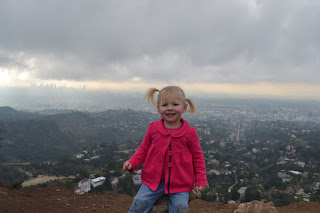 It was cold.  Hannah actually kept her jacket and shoes on (an amazing feat)!  But, on the way down we got really cold.  My fingers were numb when we got to the car and I couldn't unbuckle the girls to get them out of the stroller.  Sofia was a trooper, but close to the end she gave in and fell asleep.  What a comfortable position! 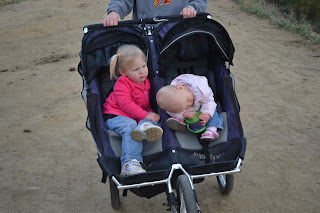 Posted by the Flammers at 3:07 PM 1 comments

James hasn't been feeling too well the past week or so, and last Saturday he was too sick to go to school.  Lucky for us, it's the beginning of the semester and he has a little bit of extra breathing room with his studies.  Unlucky for James, he has nowhere to go to hide from Hannah and Sofia.  This particular day he was on the couch trying to rest.  I did my best to do errands out of the apartment, but the park and the grocery store can only take up so much time.  Anyway, in attempt to distract them from playing with (or jumping on) Daddy I pulled the felt out of our fabric box and we began crafting.  However, Hannah was rather concerned about James.  So, she pulled out this white material and put it on James as a blanket to make sure he stayed warm.  It was pretty funny to see how concerned she was.  Later in the day the garbage truck came and was being noisy.  She went to the window and told the garbage truck to, "Be Quiet!  Daddy's sleeping!" 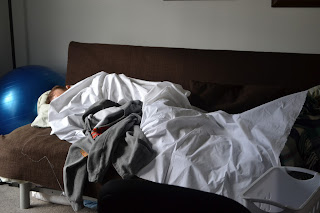 Posted by the Flammers at 3:08 PM 0 comments

I have been told I'm stubborn.  I prefer to use the word 'determined' instead - I think it has a much more positive connotation.  Anyway, Hannah seems to have the same trait.  We've never had any major issues as a result, but last Saturday we had our first major battle with Hannah.
I pulled out an old phone book to be thrown away and it was left on the floor (my first mistake).  She and Sofia started playing in it and ripped out a couple of pages.  They were being entertained so I told Hannah she could play with the pages (second mistake), but she would have to pick everything up when she was done .  Anyway, she was playing while I was getting everything ready - we were going to meet James on campus for a picnic.  After a few minutes everything was ready and it was time to leave, so I asked Hannah to pick up the paper she had ripped so we could go.  She was excited about going to have a picnic with Daddy, so I thought it would be a quick process.  As long as she's motivated, she's usually pretty good about doing what we ask.  Unfortunately, she wasn't done playing.  After trying to cajole her to pick up the mess for quite some time (maybe 30-40 minutes) I was getting weary of it.  So, I set the timer and told her if it wasn't picked up by the time the timer went off we weren't going to go have lunch with Daddy.  Well, when the timer went off she was in the process of pulling the paper out of the trash that she had picked up and throwing it on the floor.  At this point I was really irritated, because I wanted to go have a picnic with Daddy at school. BUT, I had to stick to my word, so I called James to tell him we weren't coming for lunch.  Hannah then started to cry, and then to scream, but still refused to pick up the darn paper.  After giving her a couple of opportunities it was lunch time.  I fed Sofia, but Hannah wasn't allowed to eat until the mess was cleaned up.  After Daddy came home he and I ate, but she still couldn't eat.  USually food is a good motivator for her, but not this time.  Anyway, long story short the time-outs started and a lot of crying and screaming ensued.  I can only imagine what our neighbors might have been thinking.  Let's just say it was a long day.  She fell asleep for her nap while in time out.  Here's a picture of that. 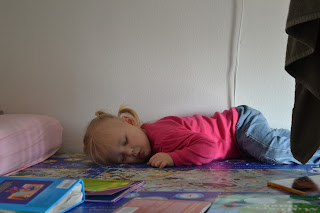 We ended up spend the afternoon battling.  She kept refusing to clean it up, but we felt like we had to stand firm in order to set the precedence.  Finally, after 6 ours, she gave in and picked up the mess.  Once it was over James and I were both tired, but she was happy as could be.  Go figure.
Please tell me this is not the first of many to come.

Posted by the Flammers at 2:59 PM 5 comments

This is what our backseat looked like the last hour of our trip from Utah back to California: 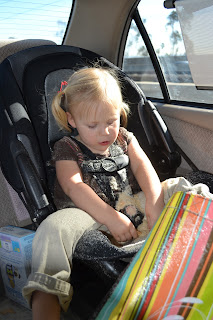 Hannah found the baby cereal and had lots of fun.  By that time I got the box the damage had been done.  At least she had fun.  As a side note - that stuff gets everywhere.  It took me almost 3 full cycles of the vacuum at the car wash to get it cleaned up.

Posted by the Flammers at 3:15 PM 0 comments

We spent almost 3 weeks at Grandma and Grandpa's for Christmas and here are some of the things we did: 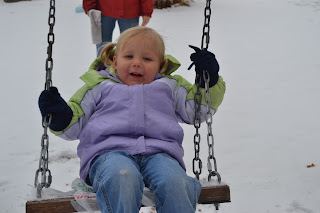 Of course Hannah was willing to brave the cold to swing. 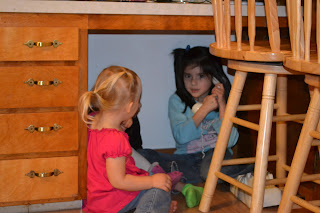 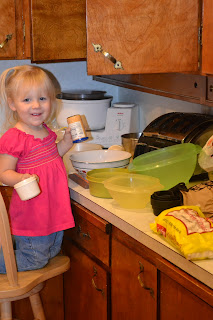 Here Hannah is 'making dinner'.  Apparently I dirty a lot of bowls when I cook! 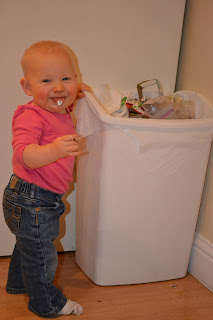 This was one of Sofia's favorite spots...I found her eating food several times. 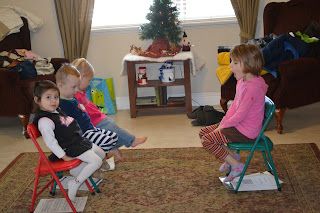 Here's the choir instructor with all her pupils. 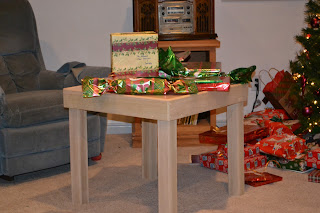 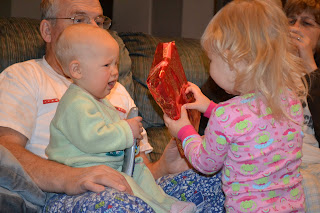 Hannah's helping Sofia open her present.  She was very helpful to everyone...maybe a little too helpful! 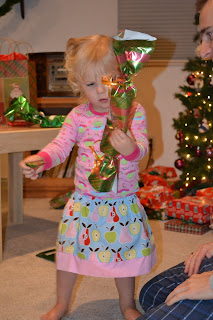 I love the outfit! 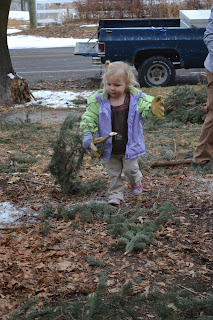 She insisted on helping haul out the branches after the Flammer boys cut down a tree in the front yard. 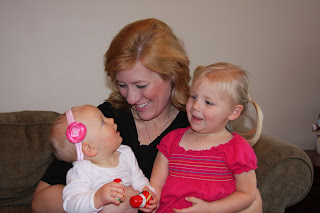 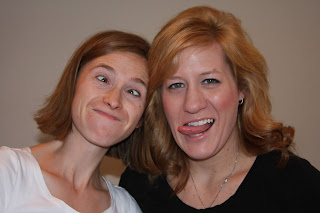 Posted by the Flammers at 9:05 PM 2 comments

We spent the holidays back in Cache Valley and recently returned home.  This is what we came home to: 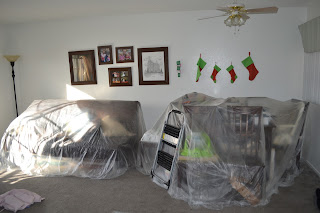 Before leaving we packed up our kitchen and bathroom and sealed up the rest of the apartment so we could fumigate.  We set off a bug bomb hoping to kill off the cockroaches.  We arrived home after traveling for over 24 hours, James had the flu, we had our entire kitchen and bathroom to clean up, and our jam-packed car to unload and put away.  What a fun day it was!  It took a lot longer to get everything put away than I would have cared for, but it did happen eventually.
Unfortunately, I probably saw 30+ roaches the day we got home, so our dreams of a bug free home are gone...but it is definitely better than when we left.  That being said, our silverware will remain in sealed Tupperware and 'yucky cockroaches' will probably be among some of Sofia's first words.  Bummer.  What else can you do?

Posted by the Flammers at 8:11 PM 0 comments