This post is about a month overdue, but we don't have much else to report on.  Several weeks ago Hannah entered the climbing phase.  One day she just decided to start climbing out of the blue. 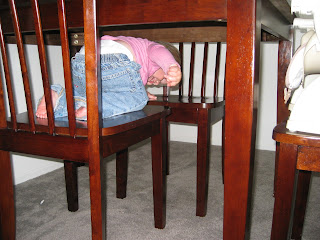 She first discovered the chairs.  We quickly learned to push them in so she couldn't stand on them. 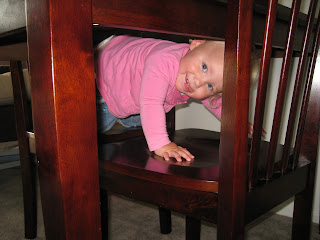 She then crawled from chair to chair under the table until she bonked her head and decided it wasn't fun anymore. 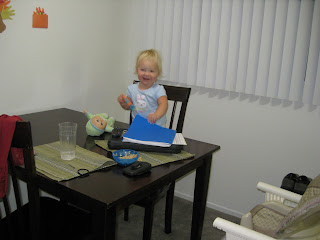 She has since learned to move the chairs and we've given in to letting her stand on them to reach the table.  She's also started trying to feed herself and absolutely loves being in the real chair like a big girl.
We've learned that we can't leave anything out.  Well, we still forget now and then, but luckily nothing of major importance has been destroyed...yet.  I've also learned that the computer only comes out during nap time and after Hannah's bed time.  She loves getting her hands on it and we haven't figured a way around it other than not using it.  HEhe.
I guess that's life.  Not to exciting, but that's all we've got!!

Posted by the Flammers at 9:16 PM 2 comments 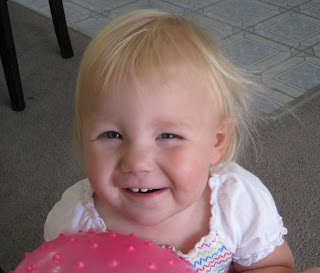 After a very very long week of crankiness, whiny-ness and general orneriness she's back to her happy self.  Honestly, this whole time change thing was not fun.  Benjamin Franklin obviously did not have children when he came up with it. We're seriously thinking Arizona is the place to live.  All I have to say, is I'm glad it's over and I'm not looking forward to it again in the Spring.  Maybe we can boycott it.

Posted by the Flammers at 2:19 PM 2 comments