Oh Where Oh Where did Hannah Go? 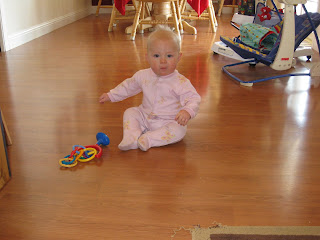 This is where she ended up... 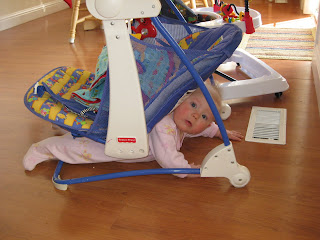 For not being able to crawl, she sure gets around.

Here are some 8 month photos. Not a whole lot has changed. She sits up and can now entertain herself for longer periods of time. Hooray! She's sleeping better at night and goes down for naps easier during the day. Pretty much, she's just getting easier and more fun all the time. She's not crawling, but she does lots of push-ups and gets up on her knees. 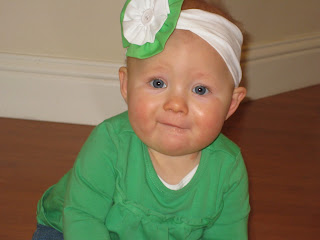 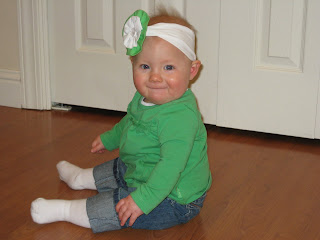 Posted by the Flammers at 1:52 PM 2 comments

I've thought about making some felt toys for Hannah to play with when she's a little older. On one of my favorite blogs, Make it and Love it, I found a felt Mr. Potato Head. So, I decided to give it a try. Here he is with boy attachments... 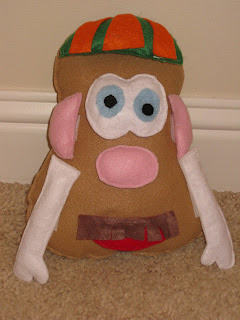 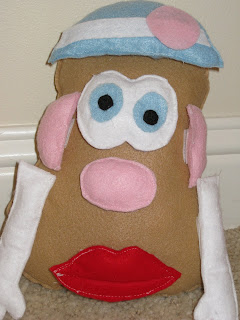 Kind of fun. It was pretty easy and cost about $4.

Posted by the Flammers at 3:28 PM 1 comments

It's not unusual for Hannah to tinkle in the bathtub - I've almost come to expect it. So, it was no real surprise when she did it today. However, a few minutes later I was just starting to wash her hair as the started to make the face. I knew exactly what was coming and tried to get her out, but I was too late. She then pooped in the bathtub. She's done this before, but it still disgusts me. Anyway, I was able to finish bathing her and got her dressed without too much difficulty.
Less than an hour later I pick her up and she stinks. So, I go to change her diaper and find the worst blowout I have ever seen. She had poop down her legs and up her back all the way to her neck. As I pulled off her clothes it got in her hair. I'm trying to figure out what it was that I fed her yesterday because it STUNK!!! The wet wipes weren't getting the job done, so I took her to the bathroom for her first shower. She didn't care for it all that much, but I got her cleaned up and dressed yet again. Now, I'm happy to report that it has been over an hour and we haven't had any more incidents. I just don't understand how something so cute can stink so bad.

Well, my parents got there mission call yesterday...and they're headed to Kyiv (Kiev), Ukraine as public affairs specialists. Yay!!! They are extremely excited and we're happy for them.